The Washington Post
1/7/2022
In the galleries: The grid is the primary motif but subject to subtle change 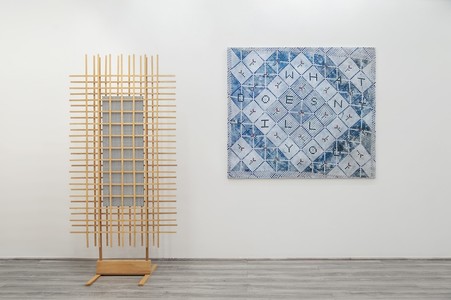 Grids are central to the art of E.E. Ikeler and Ken Weathersby, but so are deviations from these self-imposed frameworks. The two artists, dueting in Pazo Fine Art’s “Emblemata,” employ repeated patterns, executed in paint, tile or wood. Yet the orderly motifs are subtly warped by materials or the artist’s hand.

Ikeler uses netting, cast tiles and pigmented resin to construct mosaic-like pieces with decorative arrangements and, occasionally, cryptic text. The Brooklyn artist arrays circles and arcs in designs that are essentially if not exactly symmetrical, and often keys multicolor compositions to a predominant hue. Among the sloganeering works is “What Doesn’t Kill You,” which spells out the opening of an oft-quoted Nietzsche aphorism that continues, “makes you stronger.” It’s a fitting maxim for artwork that’s splintered but sturdy. 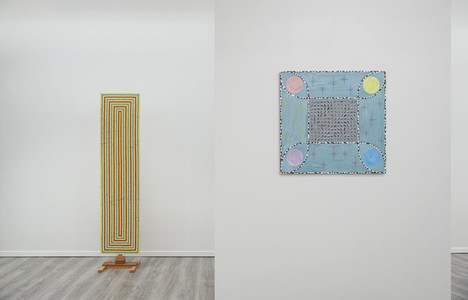 Weathersby makes paintings and sculptures, both with elements of collage. Most of them include details of photos of ancient statues, set off by lattices that may be painted or assembled from wooden slats. Some of the photos are deployed with visual wit: One is decapitated, with its head replaced by a circle filled with checkerboard squares; another is truncated to its feet, which stand aptly at the bottom of a standing wooden rectangle that’s roughly proportionate to a human body.
Sometimes Weathersby skips the photo and directly contrasts painted templates with sculptural ones. The New Jersey artist places a painted checkerboard within a sort of wooden rack, and places a skinny picture of interlocked concentric boxes on a wooden stand. The latter piece has been shattered and reassembled, as if to certify the power of patterning. In both artists’ work, the grid is slippery but indomitable. Ken Weathersby, “Time After Time” at Minus Space, installation view.

For his new series of elegant abstract paintings, on view at Minus Space through February 25, Ken Weathersby drew from seasoned images in old art history books. These books feature simple layouts, often two wide columns illustrated with black and white images. Over time, the paper on which they’ve been printed has darkened or yellowed. The paintings thus convey three distinct time frames: when the works in the images were actually made, when the images were captured in the books, and when the pictures were included in Weathersby’s paintings. Weathersby selects images of statues and reliefs from Greek, Roman, and other ancient cultures, pastes them onto mid-sized painting supports, and then wraps the supports with linen-covered frames so that the images appear to be bordered by the surrounding material. The abstract paintings respond to the shapes, colors, sight lines, and textures of the small sculptures depicted in the inset images. Weathersby’s sublime matte surfaces feature thinly applied paint and lightly-drawn geometric pencil lines. The compositions are resolutely two-dimensional, like the template grids of the old text books themselves, and each painting is titled with a number–presumably the original plate number of the collaged image. Weathersby seems to be reminding the viewer that abstract paintings may seem formalist, or, to some viewers, simply decorative, but they are in fact part of a larger timeline rooted in history, politics, and philosophy. With wit and charm, he fuses his interests in Modern graphic design, art history, and ancient sculpture. Weathersby makes erudition seem easy.

from: Hyperallergic.com
Ken Weathersby at Parallel Art Space
by Mostafa Heddaya on March 5, 2014

If, as the philosopher of art Nelson Goodman has argued,
“Denotation is the core of representation and is independent of resemblance,” then Ken Weathersby’s
tight wooden grids on view in Parallel Art Space’s Off the Wall are more than the mere “paintings” the artist calls them — they fully inhabit the fate of canvas as partition between signifier and signified. A grid, as interpretive
model in a symbolic system, embodies denotation by being itself a terrain for signification, e.g. the space that makes intelligible the slippage between “Queen to F7″ and “Checkmate.” And so too do these latticeworks with found objects, ranging from the Metropolitan Museum of Art’s Summer 1982 bulletin to bits of textile, eschew the stable universe of easel and palette to probe a more fundamental schema of mediation.

From the outside, Weathersby’s pieces straddle the clinical geometry of Op art and the organic architectural character of traditional room dividers and panels, like the Arab mashrabeya or the Japanese screen, and are unobtrusive, orderly, suggestive even of a painterly monasticism. Yet, humming with accidental multitudes, these are not a recluse’s relics: bits and pieces stripped of their original context fortify the three-dimensional matrix that Weathersby constructs like scaffolding around the troubled repose of the pictorial plane. These occlusions are ghosts in an alternately rigid and brittle system (the artist’s glue is visible at every junction), and flutter between the pictorial, verbal, and diagrammatical denotations identified by Goodman in the aforecited Languages of Art. The found artifacts play out the penury of signs, ripped from some original order and entrapped in the next, their irrelevant resemblances sublimated within the grid. Here together are the limits of symbolic systems and the lexical affects we adopt to parse them.

Ken Weathersby is certainly not the first artist to have
manipulated painting and denotation, or desecrated the ever-cooling corpse of canvas — the project has a distinctly vintage, Black Mountain College feel to it — but there is a focused and exploratory energy at work in his pieces, a maturity of purpose that stands at ascetic remove from the cloying color and sloppy corporeality that too often comes to the fore in Bushwick.

Ken Weathersby’s work is on view in Off the Wall at
Parallel Art Space (17-17 Troutman Street, Ridgewood, Queens) through March
23.